The Conjuring was an original horror film that instantly impressed. Released just after the heights of gore-porn and a slew of horror sequels and remakes, this movie was something altogether different: it told the story of real-life paranormal investigators Ed and Lorraine Warren who were involved in various high-profile hauntings including those in Amityville (the Lutz family), Enfield (the Hodgson family), and Harrisville (the Perron family), the latter of which is tackled in this film. Beginning with an ominous score by Joseph Bishara (who also acts in the film – more on that later) The Conjuring is an extremely well-crafted horror movie in every way. With director James Wan and writers Chad and Carey W. Hayes slowly building tension, this film isn’t just about jump scares but about atmosphere and character building.

The real-life Lorraine Warren appears in the scene where an audience sit for a talk on demonology at the “Massachusetts Western University” by the filmic Warrens played by Vera Farmiga and Patrick Wilson. I assume that because one of the Warrens and some of the Perrons either visited the set, appeared in the film, or agreed to be interviewed in a making-of documentary, that this was a faithful re-telling of their lives. That being said, we could see how the filmmakers’ use of artistic licence in various parts of this movie could potentially balloon.

Opening with the Warren’s Annabelle doll case, even this slightly embellished plot about a nurse’s haunted doll is directed well. With the infamous real-life Raggedy Ann toy being transformed into the now famous and overtly-scary-faced wooden doll, we could admittedly see where this film was heading if it became successful. Building a franchise off the backs of real people but with a few instances of exaggeration for the purposes of scares was a tolerable concept for me, as long as James Wan’s terrifying direction was present but sadly, this wasn’t to be. We didn’t know how far “artistic licence” and Hollywood greed would go. Thankfully, we still have this original picture to hold up as an example of how to balance the real with the fake. 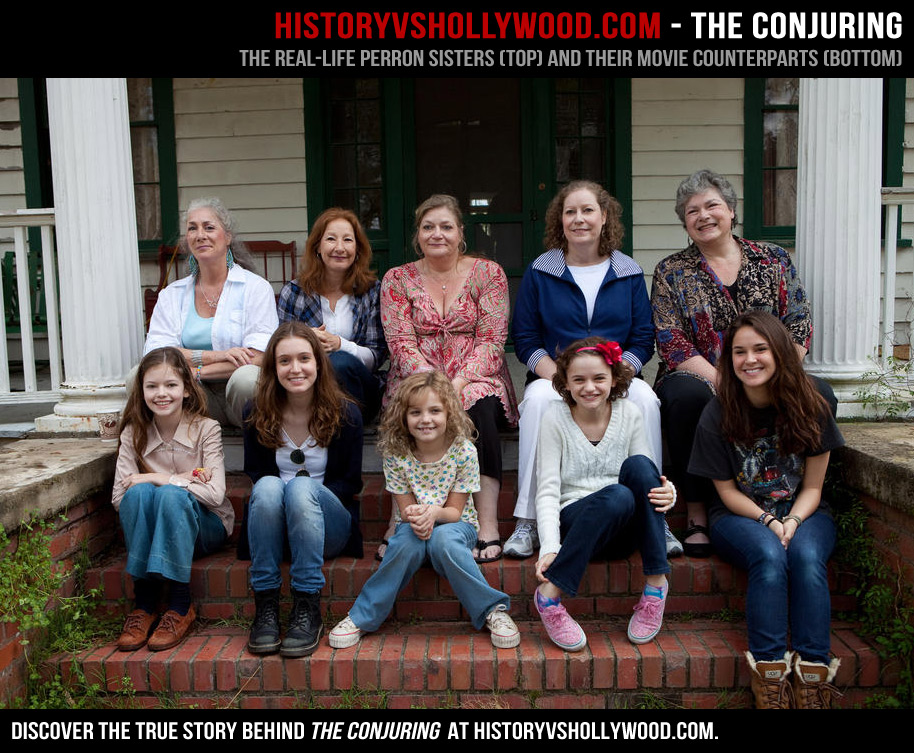 There are of course fictitious elements in this original film, and the pre-Warren’s Occult Museum room was definitely taking liberties; there’s no samurai costume and no wind-up, mirrored, jumping-jack toy in the real location (correct me if you’ve visited the actual attraction). With spooky antagonist Bathsheba crossing paths with Annabelle (whilst sat on a rocking chair in this film) this is plainly making shit up but I was willing to overlook these instances of fakery as long as the franchise made genuinely terrifying films that complimented The Conjuring franchise’s first offering.

With its dark rooms and characters whispering “someone’s standing over there” or ”it’s looking right at us”, the audience’s imagination plays a big part in why this film is so scary. What’s that behind the door? Sometimes it’s scarier when there’s nothing but shadows and our own fears and possibly a bit of Pareidolia. Along with the knocking of the wardrobe, and the now classic clapping game, subtlety was key to this horror film; there’s no skinny fingers appearing over objects, no sound of snapping bones as some modern-dance student walks around like they’re auditioning for a horror-musical, the aesthetic here is old-school. Speaking of old, The Conjuring is set in 1971, and given the time period, there’s some great costume work and accurate props such as cups and a teddy bear which people from that time will recognise.

Also on the subject of old movies and the 1970s, the influence of The Exorcist (which continues in the franchise to this day) isn’t as obvious as it is in The Conjuring 3. Any film which includes a demon being exorcised is going to have to measure-up to the William Friedkin flick but the exorcism scene in this film has enough originality to make it stand out from the subgenre archetype. The ripped cloth obscuring the possessed’s face and even Bathsheba hovering over her victim is arguably as scary or scarier than The Exorcist.

Aside from the successful scares, the cast is another reason why this film is enjoyable. Everyone in the Perron family is likeable from the youngest to oldest (Joey King is particularly great as Christine Perron). Her mother Carolyn Perron is played by Lili Taylor who has probably had it with “Hauntings” by now 😆. Taylor is another great actor; both sympathetic and scary when needed. The dad Roger Perron who is played by Ron Livingston, is a relaxed presence in an otherwise tense film, maybe because he’s not in the vicinity of someone wearing their 37 pieces of flair 😉. Music-maker and actor Joseph Bishara plays the central antagonist; the ghostly demon named Bathsheba and his performance is truly terrifying, in fact not casting him in subsequent sequels is definitely a factor as to why the follow-ups haven’t been as scary. I’ll also add that in the real world, you usually can’t pin-point why a house or an object is haunted; hauntings are usually enigmas and they’re more scary because there’s no back-story or evidence. But I digress.

Showing the real-life Perrons and Warrens during the closing credits gives this horror classic a sense of authenticity and believability, and this participation showed that this story was based in reality. Although the idea of being “based on a true story” has continued throughout The Conjuring series, it has gotten progressively watered-down until the most recent offering (The Conjuring: The Devil Made Me Do It) is three-quarters fiction. The fact that the majority of this film’s narrative is grounded in reality, along with the talented cast, the direction, the writing, and the score, all those involved in the making of this movie have without a doubt…

What Went Wrong With… The Conjuring Universe?