City Of Lies is a drama-thriller about the shooting of rappers Tupac Shakur and Christopher Wallace aka Notorious B.I.G. aka Biggie Smalls, specifically the latter’s death and the investigation into the case by Detective Russell Poole, played in this film by Johnny Depp. This movie was set to be released in 2018 but after a lawsuit against Johnny by a location manager, suddenly the film was nowhere to be found. Was City Of Lies being suppressed by the Los Angeles Police Department or someone in authority who didn’t want the truth to come out? The fact that the reputations of both the film’s actor Johnny Depp and the production company’s founder Harvey Weinstein were tarnished or outright disgraced, to some this was evidence that this film was playing with fire and everyone involved was being hushed.

Suddenly, in 2021, City Of Lies is now available to stream online. No longer distributed by indie-movie-powerhouse Miramax, the film is now in the hands of Saban, who are usually responsible for sub-par B-movies and err… Power Rangers. Peep the difference in the trailers and see the contrast in tone between each distributor. The original Miramax version which looks like a gripping thriller:

And the new Saban version which makes the film seem like a trivial Hip-Hop TV-movie: 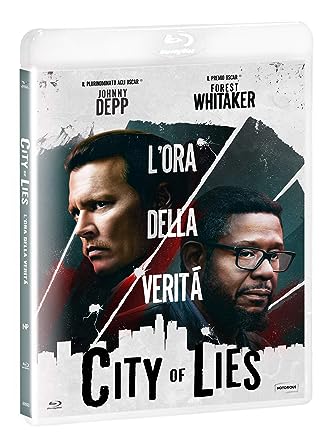 The alleged subduing to the outright suppression of this film led me to buy the blu-ray from Italy, since that’s the only country in which the film had a limited cinematic release and is available to purchase in physical format. I’ll point out that I’m reviewing what I watched on the Italian blu-ray; I have no idea if the current video on-demand version is any different in terms of edit but if it is, that’s not what I watched.

Despite Tupac and Biggie’s murders being my generation’s equivalent of John F. Kennedy’s assassination (along with the 9/11 attacks) the unsolved murder is one of those things that most people in the 1990s, especially Hip-Hop fans, remember as being a curious and suspicious event. There have of course, been various documentaries about these two rappers’ deaths, one by Nick Broomfield and another which aired on Netflix, but neither felt compelling to me. This is where City Of Lies does a slightly better job than other offerings which purport to delve into the same subject.

In this movie, parts of the investigation are very interesting to watch. From the amount of corrupt police officers on Death Row Record’s pay roll, the possible ownership of the Chevrolet Impala SS which was used in the assassination, Foxy Brown and DJ Quik being witnesses, and P Diddy’s vehicle driving past the red lights leaving Biggie’s in the line of fire, there’s lots of information here for rap fans to feel like they’re privy to something potentially dangerous. There’s also some very tense and enthralling scenes such as Depp’s Russell Poole going through the shooting via scale models. A scene like this is as engrossing as Jake Gyllenhaal talking with Mark Ruffalo in the cafe in David Fincher’s Zodiac. The re-enactment of the murder (including a very convincing vocal of Biggie) is also realistic and gives you goosebumps when you watch. That being said, there’s a few things wrong here. The pace and editing makes this movie more of a slow drama; every time there’s a thrilling scene, it’s interrupted by commentary about police politics and family issues. The remixed music also never sounds right for the mid-to-late nineties setting and most importantly; like all the documentaries before it, City Of Lies gives no shocking conclusion despite the promise of one. The poster reads “Who Shot Biggie?” but this film doesn’t give you a satisfying answer. There’s no smoking gun here.

In terms of acting, both Johnny Depp and Forrest Whitaker give likeable and captivating performances, and other actors including Shea Whigham, Shamier Anderson, Amin Joseph, and Peter Greene give a sense of believably to the setting which includes gang-bangers and LAPD cops and the blurred lines between the two. The film also stars Biggie’s mother Volletta Wallace as herself, although her presence makes her scene suddenly feel less like a film and more like a documentary.

It’s strange that people act like any theory put forward about this case is mere mad-cap conspiracy. It’s not like someone is tying together the murders of Biggie, Lady Diana, and Gianni Versace. The case seems, at least to an outsider, highly suspicious, and the conclusions put forward by this movie compelling and believable. Whatever happened on March 9th 1997, this film documents the events and gives us the opinion of a qualified police detective who investigated the murders first-hand. That being said, City Of Lies falls short of being a JFK or Zodiac in terms of thrills, and that’s mainly due to Brad Furman’s direction which is more drama-oriented than outright thriller. The film becomes more of a testament to Russell Poole’s life and career, and the film pushes the idea that one sole incorruptible cop (or for that matter, journalist) is evidence that there’s always one righteous person or non-sell-out in an otherwise disreputable and dishonest field (this is probably the reason Killer Mike appears in the film, a rapper who according to his opinion on the George Floyd riots, has family members in the police force).

This may not be the message most viewers want however; fans of Biggie going to watch a film about his unsolved murder leave with what is essentially an ode to the detective who tried but was ultimately unsuccessful in solving the case. This isn’t exactly a let-down, but it feels like City Of Lies could have easily been a longer, more in-depth historical thriller. There was also possibly a better way to convey the findings, instead of becoming an obituary to one good cop. The 1973 BBC series Jack The Ripper which went through evidence and theories of another famous unsolved crime, did so in a theatre style, and managed to air on a stuffy channel by conveying “conspiracy theories” in a mainstream format. City Of Lies does the opposite; it kinda overpowers the “conspiracies” under a part-biographical drama. Given that this movie contained numerous riveting scenes, City Of Lies could have been so much more. That being said, it’s still worth watching but don’t expect the modern equivalent of Oliver Stone’s JFK.