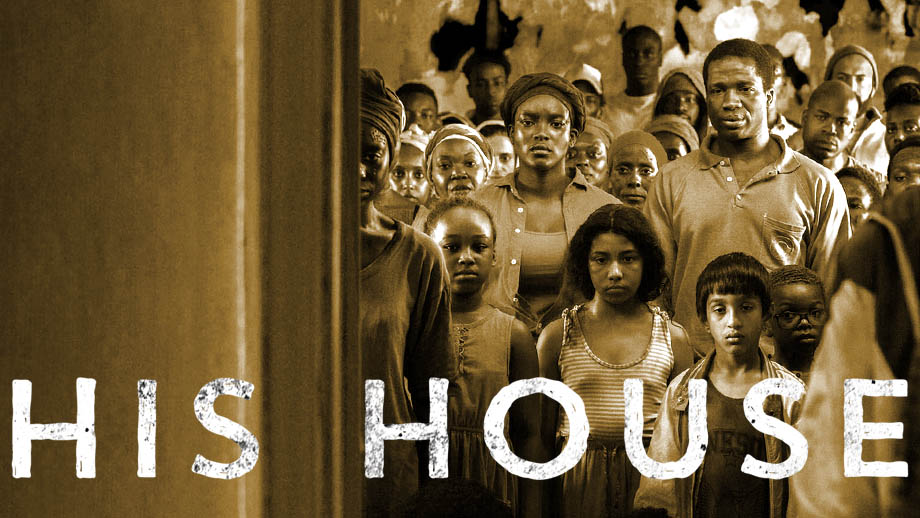 His House is a supernatural horror-drama written and directed by Remi Weekes about two asylum seekers who make it to the UK only to be confronted by spirits and apparitions. This film is described online as “a couple from war-torn South Sudan seek asylum and a fresh start in England, but they’re tormented by a sinister force living in their new home”. This description isn’t exactly true. His House isn’t your typical haunted house movie. Here, instead of a spooky spectre, it’s your past that haunts you, your mistakes haunt you and your guilt haunts you. As a character says “your ghosts follow you”…

The film stars Ṣọpẹ́ Dìrísù as Bol and Wunmi Mosaku as Rial. Both actors give great performances and Bol in particular, who’s an optimist, is very endearing. This is an impressive debut from Remi Weekes who creates a brooding atmosphere, as well as pertinent commentary about the world. Weekes includes some moving dialogue. Bol at one point has to correct himself: “I work in a bank. I worked in a bank”. At one point Ṣọpẹ́’s character says “We are one of the good ones” which I’m sure many self-aware refugees think and say when taking into account the media’s portrayal of them. The film also stars Matt Smith (who plays Mark, the couple’s caseworker) and he has a few humourous lines including him reading the rules to Bol and Rial: “no ball games, no games, no ball”.

The couple are housed in a run-down council estate which would typically be populated by white chavs (and it is) but here there’s a scene with three young black boys who chastise Rial about her foreign accent and say “go back to Africa”. This is a much needed scene; we sometimes forget all the minority sellouts who scramble to be part of a white society, a white society that in many ways regards them as foreign too.

Speaking of racism, I’ve read casually racist morons mentioning the likes of “Jordan Peele” when describing this film, as though he’s the only black filmmaker around and every subsequent black-made movie must have something in common with Get Out or Us. No, this isn’t Get Out or Us; this film doesn’t wander away from it’s central premise and never forgets it’s point of view. His House actually has more in common with The Babadook, in so far as it’s a slow, brooding, atmospheric horror with emotion and substance. Instead of mental illness, we have remorse and repentance as the ghostly antagonist. As Rial says “After everything we’ve endured, after what we’ve seen… you think it’s bumps in the night that frighten me?”. This is a film about human suffering and our survival instinct alongside sin and shame.

People expecting a non-stop scare-fest will undoubtedly be disappointed but it’s their own fault for not recognising what this film is. His House is not all about politics however; there’s some genuinely frightening jump scares. The Witch or “Apeth” (played by Cornell John) isn’t as terrifying as a character by Joseph Bishara but all of the glimpses of the spirits are terrifying, especially when watching at night.

Haunted House horror movies are rife with cliches and absurdities, but for once, the audience can’t shout “just move!” at the screen. What awaits the couple back in their country is far worse than an apparition. Bol and Rial’s neighbour says “why don’t you just leave?” which could be another comment on society but also a clever subversion of the haunted house sub-genre. Our couple cannot leave, so the typical audience reactions to a haunted house movie cannot apply.

What’s irritating is that high-profile people like Donald Trump and Priti Patel have demonised refugees and asylum seekers to the point that we can’t even have an unbiased review of this film. On IMDb for example, His House is currently at 5.7/10 because far-right xenophobes have skewed the rating by giving it a 1 out of 10. But I implore you to ignore these ignorant, unsympathetic, tendentious twats. His House is not a perfect movie but it’s relevant and emotional, it’s well written and superbly directed.

Being released a day before Halloween, His House isn’t your stereotypical horror film. But since this isn’t a typical Halloween where we can freely trick or treat in our neighbourhood, maybe this year we should empathise with all our neighbours and reflect on the real horrors of the world.

Make A House Your Home.