Almost universally hated by critics when first released, the 2006 remake of the 1974 horror film Black Christmas was a gaudy and comical slasher movie. Some of this criticism was a little unfair, after all, given the time period, alongside all the Saws and Paranormal Activities, Black Christmas wasn’t exactly the worst horror film around. The plot of this remake took the original story of a killer in a sorority house during Christmas and added a handful of new elements and not all of them worked. William Edward Lenz or Billy Lenz (the killer) was given a backstory: his mother locked him up in the attic when he was young and his childhood included sexual abuse, incest, rape, and even cannibalism. The molestation by the hands of his mother also resulted in a daughter/sister called Agnes (who despite being one of Billy’s first assault victims now kills alongside him which makes little to no sense). Given the overall tone of the picture, this cartoonish, two-killer concept could have led to Black Christmas being a sequel rather than a remake. Hell, they could have called it Black Christmas Too and filed it under all the other non-serious “Two/Too” sequels.

In this remake, Billy has been given yellow skin. We’re told that he was “born with a rare liver disease that gave him yellow skin” (so not jaundice?) but this colour does nothing for the story so you’re left wondering why it was added (yellow isn’t even a Christmassy colour). One of the first scenes in the film is set in a hospital ward with a security door labelled “Criminally Insane 12-25”. This Xmas-date joke is then followed by an orderly handing out food to all the inmates or patients. When we get to door 25, there’s a man who thinks he’s Jesus (hey, he could actually be the second coming). This sets the tone for the rest of the film; if you’re fine with a throwaway and even facetious horror flick, then this movie will appeal to you.

In this reboot, there’s multiple flashbacks set in Christmas past: 1970 when Billy was born, 1975 when Billy’s mother and her boyfriend murdered his father, 1982 when Billy was raped by his mother, 1983 when Agnes was born, and 1991 when Billy enacted his revenge. The placement of these flashbacks are intermittently edited into the present to suggest Agnes is possibly one of the sorority sisters but we’re shown a bigger woman with a stockier frame so there’s not much of surprise. Aside from the female characters, the location and season, the bag-over-the-head death, and the glass unicorn gift are the only other references to the original film. This remake seems to want to stand on its own but there’s nothing that distinctive or original about it.

The original Black Christmas wasn’t the greatest horror film so a reboot could have improved on many things but alas, this doesn’t. The flashbacks (which seem to be the biggest change) does flesh-out the plot (quite literally if you consider the implausible scene where a cookie cutter is used to make angel shapes from human flesh). This backstory could have been conveyed in an extremely dark and genuinely terrifying way but the film-makers decided instead, to make a horror-comedy which is disappointing given the subject matter and the title of the film. Someone killing their abuser is surely justified but here, we have them (and their inbred offspring) as the central antagonists. When Billy kills his mother, you side with him but when he removes and eats his sister/daughter’s eye, Billy is back to being a cliched bad-guy.

Inspired partly by serial killer Ed Kemper’s upbringing (or possibly by films such as The Unseen and The Beast In The Cellar), this potentially serious plot is ruined by writer-director Glen Morgan. His writing partner James Wong was responsible for Final Destination and he also worked on some of the best X-Files episodes including “Squeeze” and “Tooms” so this remake is quite the disappointment by comparison. On a side note: it seems to me, that James enjoys writing about yellow-skinned serial killers with three names (Eugene Victor Tooms/William Edward Lenz). Although, Edmund Emil Kemper as far as I know, didn’t suffer from Jaundice.

The original Black Christmas (1974) either directly or indirectly influenced Halloween (1978) but in this 2006 film, oddly, there’s a very familiar plot of a killer escaping a mental hospital and going home which to me, is ironically lifted from the John Carpenter classic. The escape from the insane asylum-slash-hospital at the beginning at least explains why the killings start (an explanation that was not present in the original) although Agnes had the opportunity to kill before Billy’s escape which is another element of the plot that doesn’t make any sense. 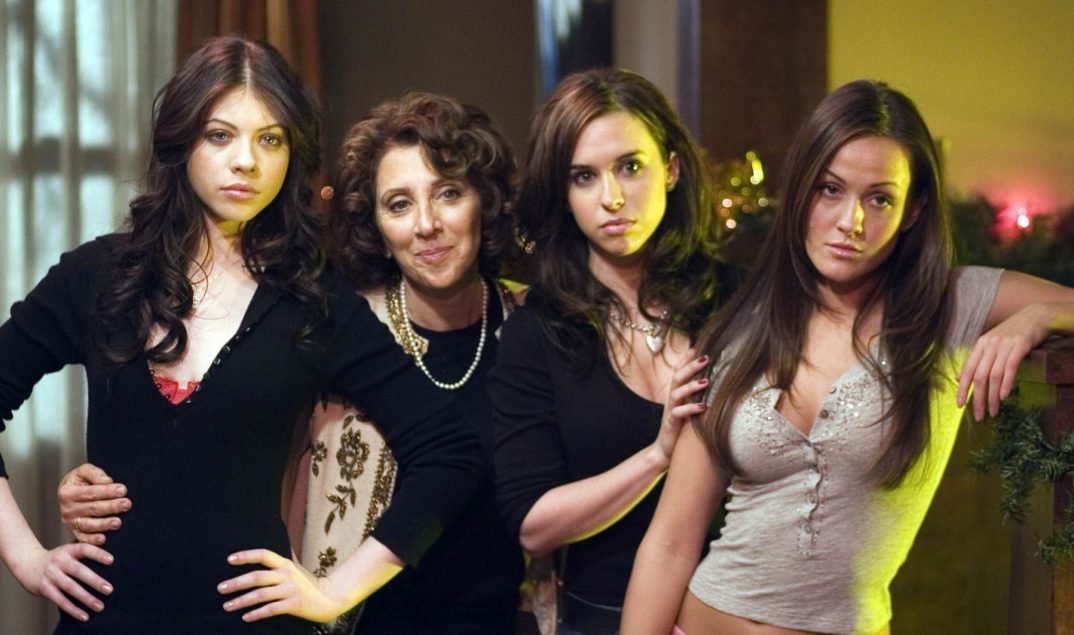 Andrea Martin (second from left) playing “Mrs. Mac” in the 2006 version of Black Christmas. Andrea played “Phyl” in the 1974 original.

There’s a group of annoying, second-rate actors who can’t decide whether they’re in a slasher film or a tween comedy. The girls generally have a valleyspeak twang and they say things like “It’s like Christmas time” – well, is it or isn’t it? Mrs. Mac, the house mother, is also not as distinctive as her character in the original although the actor playing her appeared alongside the original Mrs. MacHenry in the 1974 version (see image above). Billy’s mother is at least played by Karin Konoval (another X-Files connection) who is a great actor but she’s wasted in this flick. I also have to say that Kyle is a fucking irritating character, making Peter from the original look down-to-earth and likeable.

Nothing is left to the imagination in this film. There’s more gore here than in the original which is indicative of the time in which this was made. The removing of eyes looks very unrealistic and most of the gory scenes involve blood spraying over random objects rather than actual disemboweling or bludgeoning of people. Aside from the ramped-up gore and the clear-cut backstory, there’s a scene where Billy (as a child) crawls past a photograph of his father (who is the only good guy in his childhood) and he is shown wearing a Navy uniform. There’s also a scene where Billy’s dad is seen holding a cigarette lighter with the inscription “KHE SANH 67-68. NOT AFRAID. JUST LONELY”. The Battle of Khe Sanh was of course part of the Vietnam war (although that battle occurred between January and July in 1968 so the date in the engraving is incorrect). This kind of subtle militarism is an example of the time in which this movie was created, it was the noughties after all and post-9/11, everyone including Hollywood became military-suck-ups (they’re all heroes!). This kind of contrived shite is still going on in film to this day. Very much like the Motorola Razr flip-phone which every character in this film is seen holding and which is still around in the present day, we just can’t seem to let the godforsaken noughties go can we?

Whilst on the topic of the past, similar to the way in which the original Black Christmas was pulled from TV broadcasts following Ted Bundy’s university spree, the cinema release of this remake also resulted in certain religious groups protesting it’s “offensive”, “ill-founded”, and “insensitive” content. Apparently, every atheist and agnostic (not to mention every follower of non-Abrahamic religions) shouldn’t be allowed to watch this movie because it offends a few Christians. This so-called controversy, along with the original, proves that outrage culture has existed for longer than most people think. But I digress.

In terms of writing, there’s a quick blip of an interesting conversation about Paganism and Christmas but it fizzles out into nothing. The line spoken by Billy (“They’re/she’s/he’s my family now”) is surely a reference to Papa Lazarou from the second series of The League Of Gentlemen? (it sounds way too similar not to be – maybe Morgan and Wong were fans?).

With all the issues with the plot and tone already covered, I’ll also add that the post-impaling fading-out wasn’t a great ending. In my opinion, the “UK Edit” of the movie is shorter but much snappier and there’s also a better finale (Billy is burnt rather than impaled followed by a shot of a “Peace On Earth” sign on a hospital door). Apparently the original (even better) ending featured two of the survivors receiving a phone call from Billy which would have alluded to or paid homage to the original film but this was changed by producer Harvey Weinstein (very reminiscent of Snowpiercer).

With all these problems, why is this review in whatwentrightwith.com you ask? Well firstly, the sets and cinematography result in a very Christmassy film, at least visually. The set design and the lighting is first-rate and everything is seemingly lit only by candlelight and fairy lights which looks very cosy. The warm glow of Christmas lights, candles, and roaring fire, coupled with masses of tinsel and bows, and snow (which there was a lack of in the original) is all very festive to look at. The sharpened candy cane on the posters of the 2019 remake originates from this movie and that too is a clever, Yuletide-inducing concept.

I will say that a B-movie tone is something that is more tolerable during the holidays. There’s many Christmas films that try very hard to “look Christmassy” rather than be entertaining and this is one of them. Films such as the overrated Love Actually and the recently underrated Last Christmas would be ignored or disliked by almost everyone if the Christmas-setting were to be removed. I’d estimate that 80% of festive films would be intolerable if it wasn’t the “season of joy”. Hell, even the original Black Christmas wasn’t a flawless film but on the lead-up to Christmas it’s a great watch. If you sit down to view the Black Christmas remake any other time of the year, it would probably be an unforgettable slice of trash but at Christmas, even this average remake is watchable and even enjoyable.