What Went Right With… The Rebel aka Call Me Genius? 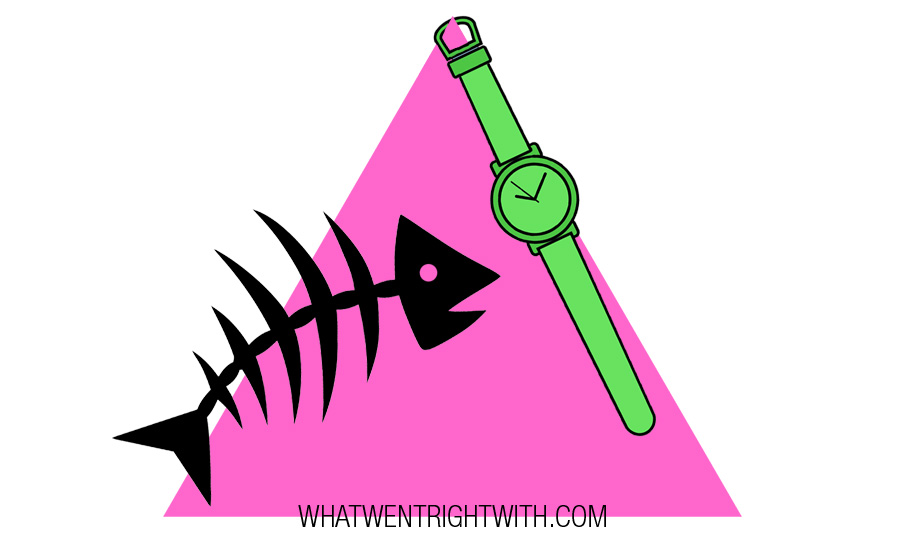 The Rebel (also known as Call Me Genius) is a 1961 film starring the late, great Tony Hancock. Written by duo Galton & Simpson, the film is a comedy that brilliantly satirises modern art as well as “arty” types and even office workers. I was reminded of this film whilst viewing Velvet Buzzsaw on Netflix, which at first glance also attempted to satirise contemporary art. In my mind, The Rebel (which I saw for the first time when I was very young) was so much better in its construct and overall opinion. To see if I was right and to check how well the film has aged, I viewed The Rebel again. The film, I’m pleased to say is just as funny as I remember it although there are a few problems with the overall viewpoint (more on that later). 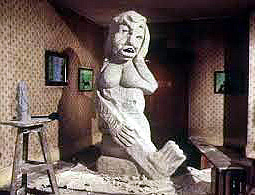 “Aphrodite At The Waterhole”

Tony Hancock plays Anthony Hancock (probably to appeal to his Hancock’s Half Hour fans) an office clerk who is disillusioned with his 9 to 5; commuting to work in a packed train with similarly dressed men and working robotic-ally in complete silence. Bored with his monotonous job, he sometimes embellishes his statements with an ornate initial (which he amusingly says takes him 2-3 hours). He also caricatures his co-workers in his ledger, something he is chided for by his superior. In his spare time, Anthony is an aspiring artist; he paints self-portraits, landscapes, and he is working on a gargantuan sculpture of a nude woman made of reclaimed stone and discarded concrete blocks titled “Aphrodite At The Waterhole”. The problem is, despite having a longing to become an artist, Anthony’s art is crap.

After his landlady scoffs at his work, calling it “miscellaneous rubbish”, Hancock packs-up his belongings and withdraws all his savings. He travels to Paris, France, where surely among other artists, his art will finally be seen in the same way as Anthony himself sees it? After overhearing a group of artists chatting in a bar, Hancock begins discussing his artistic techniques, and of course since he has no real talent, he wings it, making up a description as he goes along (“your colours are the wrong shape”). Surprisingly, this is seen as a completely new concept in art, especially by his newly-acquired friend Paul Ashby whose art isn’t appreciated either. Suddenly Anthony is the talk of the town, he is invited to all the cool gatherings and his art is finally appreciated by his peers (including some Beatniks who all dress in black but who look appalled when they hear Hancock recount his tales of his black-suited co-workers).

This is where the first problem, albeit minor, occurs. Most, if not all of the artists depicted are stereotypes, and not all of them are correct. The first group of starving artists that Hancock encounters for instance (which includes Oliver Reed) are discussing the merits of Paul Cézanne as they smoke cigarettes but they’re so poor that they can’t afford to drink any wine (and of course they’re all dressed in drab rags, sat in a bar with onions hanging on the wall). But remember that this is 1961, surely Surrealism and Pop Art has made it’s way to the fore? Why discuss Post-Impressionism in the wrong half of the wrong century? This is only a small problem however, where the film falters massively in my eyes is in the second half.

As soon as art critic Sir Charles Broward sees Hancock’s art, he hates it, and he scorns it thinking it’s the work of his roommate. The film then descends into somewhat of a farce with swapped art and wealthy yacht-dwellers commissioning work, women falling for Hancock so much so that they want to commit suicide if they can’t be with him. All these antics aside, because we the audience finally hear “official” clarification that Anthony’s art is indeed rubbish, the whole “anybody can make modern art” idea is wiped off the table. The brilliance of the film therefore lies in the first half, where the better concept; that anybody with ambition (no matter how talent-less) can make modern art is conveyed. But the way in which the film unfolds, we’re essentially told that artists don’t really know what they’re doing, but critics are legitimate and they know their Pollocks from their bollocks. 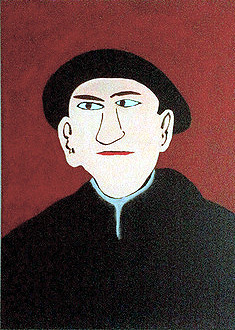 All this of course, doesn’t take away from the comedy element of the film, and despite its plot-based shortcomings, The Rebel is still very funny, even five plus decades after it was first released. The film is constructed so Hancock gets pretty much all the best lines, and it goes without saying that all of them are delivered exquisitely by him. Aside from the always hilarious Tony Hancock, it’s Irene Handl (For The Love Of Ada) who steels the show as Anthony’s landlady Mrs. Crevatte. The main quotables from this movie are all from the scene in which we first meet her, and when she sees Anthony’s art for the first time they hilariously interact:-

Hancock: “That, is a self-portrait.”

And when seeing his sculpture “Aphrodite At The Waterhole”:-

Mrs. Crevatte: “Here, have you been having models up here? Have there been naked women in my establishment?”

Hancock: “Of course there haven’t. I can’t afford thirty-bob an hour. I did that from memory. That is women as I see them.”

Mrs. Crevatte: “Oh, you poor man! Ooh, fancy knocking about with women like that. I wonder what your kids ‘ll look like”

I will say that in reality there is no such thing as “bad art”, after all, it’s not like art is a science, saying something is good or bad is just a matter of opinion, it’s just unfortunate that certain people’s opinions are given more credence than others (but you don’t want that kind of summation in a satirical comedy). 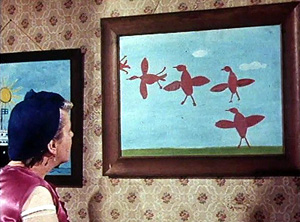 Speaking of art, it’s quite ironic that in real life both the work of Anthony Hancock and Paul Ashby was created by the same artist (Alistair Grant) and therefore all of it has an appeal, even if some of it was created intentionally to look a bit shit. Anthony’s art is badly painted but it’s assumed by other artists that Hancock is deliberately painting in that way. His art and style is therefore labelled “Infantile School”, and it is looked upon with awe by other pretentious artists. Like I’ve already said, this is where the brilliance of the film lies; even the worst art and artists can gain fame and fortune, and in a precursor to the Damien Hirsts and Tracey Emins of the world, Anthony Hancock’s lacklustre artwork is hailed as genius. I suppose that had this been the only plot of the film, The Rebel would have been an hour or so long, so in some ways the final act is needed, even if it spoils the central satire.

In the finale of the film, Hancock then goes back to his regular life in which art is just his hobby, although now, his landlady is his model. This for me is the final slap in the face with Ray Galton and Alan Simpson suggesting that people with aspirations should stay in their place and get on with the drudgery of meaningless work. Only the “talented” therefore should work in the artistic sectors, and amateurs should remain as such. Galton and Simpson have been responsible for some classic material over the course of their career but even this “infallible” comedy duo have created disappointing crap (namely The Galton And Simpson Playhouse) so surely if “the best” can make dross, “the worst” may one day make something distinctive, but I guess we’ll never know if everybody is told to “stay in their lane”. This disappointing ending for me, spoiled the core concept of the film.

On that note, it has to be mentioned that The Rebel, despite being a success in Britain, was not a commercial success overseas, particularly in America. The line that is delivered by Tony Hancock in this film could therefore easily apply to his real-life international naysayers; “None of you know what you’re looking at. You wait ’til I’m dead, you’ll see I was right!”.

All of my criticisms aside, I still found The Rebel to be a highly enjoyable film. I’m therefore surprised that it hasn’t been released on blu-ray, even in Great Britain where Tony Hancock is as mainstream and as well known as Charlie Chaplin. To my dismay, a DVD copy is the best quality we fans in the UK have, but even in digital disc-format, the quality is relatively poor with jumps between reel changes and defects on the negative. The film is also presented in 4:3 ratio and I’m uncertain whether this is a “pan and scan” crop or not. Hopefully with enough interest, Warner Brothers and Studio Canal will re-scan the original negative (regardless of aspect ratio) and release this in a pristine HD format. Until then, fans will have to do with the DVD version which is…

Worth 10 Quid Of Anybody’s Money That Is.

Update: The Rebel will be released on 30th September by Network. The movie was filmed in 1.66:1 ratio. 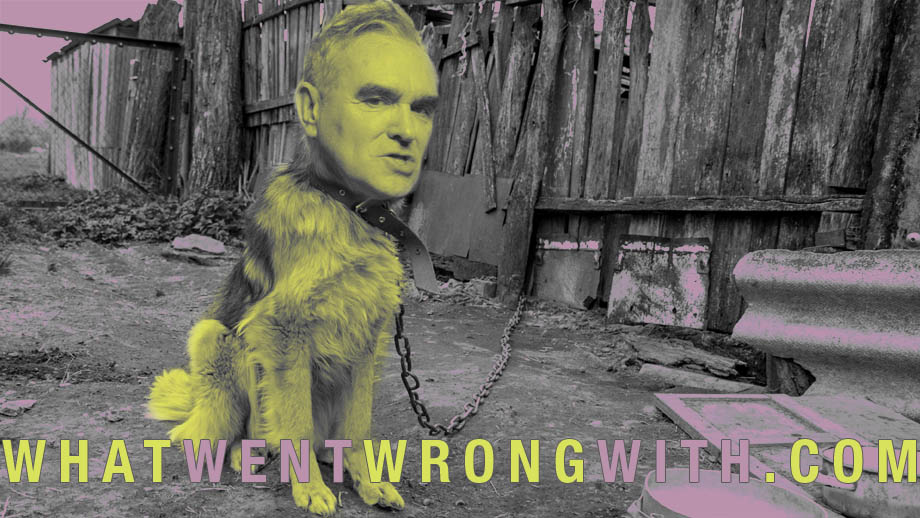 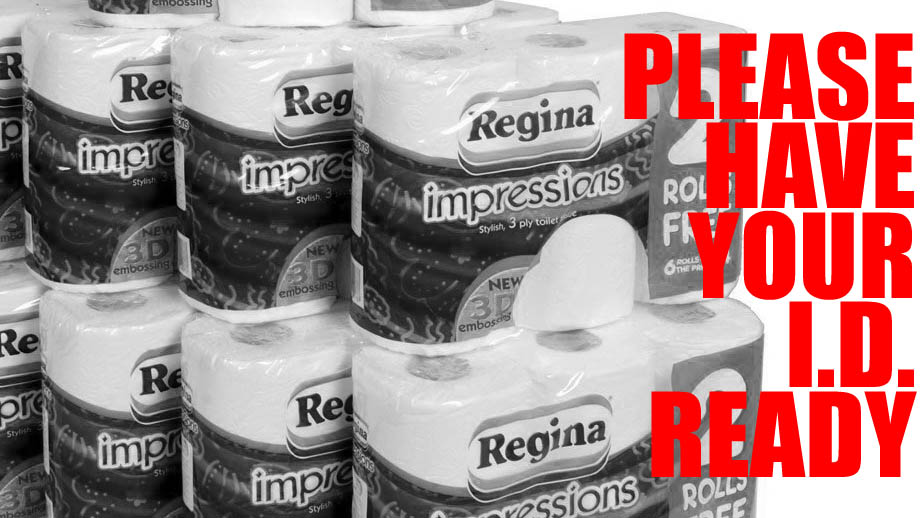 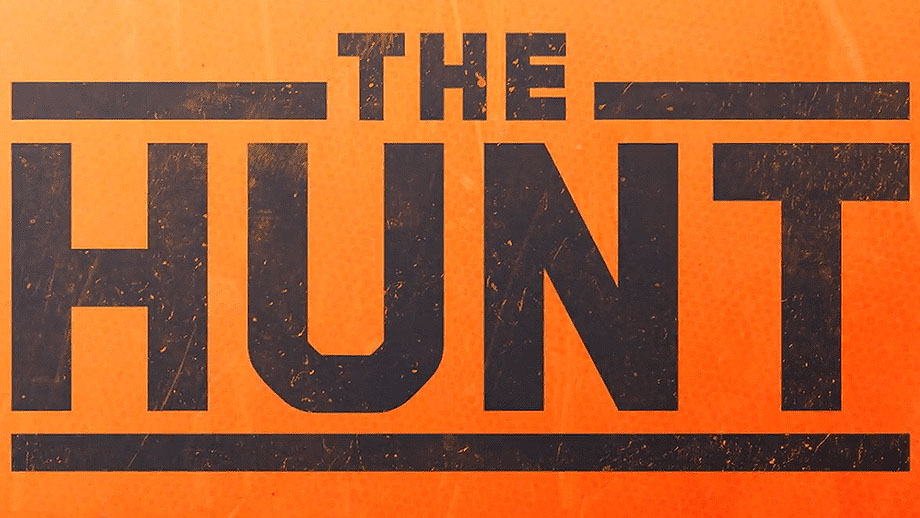