What Went Right With… Duel? 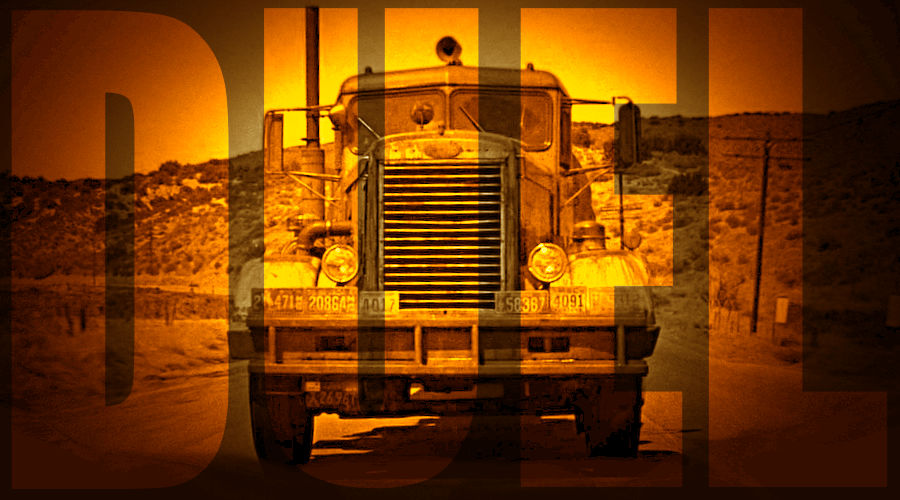 Duel is a fantastic thriller, in my opinion it’s one of the best TV movies of all time and it’s arguably Steven Spielberg’s best film, in fact it’s a great movie regardless how you categorise it. If you’ve never seen it, Duel is a very straightforward story of a salesman named David Mann (played by Dennis Weaver) who is travelling in his car on a business trip. Whilst driving along a long stretch of road, Mann comes across a slow-moving truck, he decides to overtake the vehicle and subsequently annoys the driver. From that moment on, the driver of the tanker truck stalks Mann in an attempt to scare, injure, maim, and even kill him.

The character of a travelling salesman is paired perfectly with his clean yet flimsy red Plymouth Valiant, the car is an extension of Mann who is rather anal and who drives under the speed limit. Both David and his Valiant look small and puny in comparison to the larger, meaner tanker truck. This clean, practical car is then unfairly pitted against a grubby, soiled, mean-looking behemoth of a tanker, a Peterbilt 281 driven by an unknown driver. The vehicles in Duel are characters every bit as much as the people, the truck especially with it’s mean grill and long hood giving it a personality and a kind of face. The car with it’s plain utilitarian looks playing the David to the Peterbilt Goliath as they duel to the death on an open and lonely stretch of road.

Duel pre-empted the 70s craze of vehicle-based Action Thrillers, it came before and therefore planted the seed for movies such as The Car, Race With The Devil, Vanishing Point, and even Dirty Mary Crazy Larry and Death Race 2000. In fact Duel was partly responsible for the 70s trucker movie zeitgeist where CB radios and rigs were everywhere (Smokey And The Bandit, Every Which Way But Loose, and even the RiffTrax victim Breaker, Breaker to name but a few). And let’s not forget that Duel‘s influence has reached far beyond the 1970s, it has for instance paved the way for the likes of Breakdown and Joy Ride (aka Roadkill) even the Horror Anthology film Nightmares included a similar premise in one of its short stories.

For me, Duel is without a doubt the best vehicle-based Action Thriller of them all, even though the plot is simple, it’s a fantastic thrill-ride even when watched today. In fact, with CGI taking over most of Hollywood’s output, especially the Action genre, Duel is like a breath of fresh air when viewed today. When a piece of metal hits metal in this film, it crumples and dents, you can almost feel the impact and you can see the damage. There’s no unrealistic flipping of vehicles and overpaid actors doing acrobatics as they leap from green-screened stationary cars, everything is real and therefore believable, something maybe both Hollywood and Spielberg should consider going back to for certain types of films.

This 1971 film also features a fantastic score by Billy Goldenberg, utilising strings to ramp up the thrills and harps to bring out the eeriness of the isolated road. Some of the music even evokes Bernard Herrmann’s Psycho and there’s some brilliant synthesised industrial-style noises that add to the sense of horror especially during the cliff climax.

This film is very quick to get going, there’s no useless back-story or side-plots, Mann pulls his car out of his house, he drives for a while listening to the radio, and within minutes he’s behind the tanker truck as it spews out its smoky fumes. From that point on it’s pretty much relentless thrills. There are short reprieves such as David stopping at a café or the scene where he tries to help push a broken-down school bus, but even these scenes add to the unfolding plot and even adds to the mystery of the tanker driver. The scene where Mann looks at all the cowboy boots of the customers at the bar and tries to deduce the identity of the truck driver is simply brilliant, it’s slow yet tense and the score and camera work compliment each other wonderfully. The way Spielberg handles these relatively quiet and still moments immediately after a kinetic and hectic chase is fantastic, even when the film breaks from the action every single scene adds to the tenseness of the overall film.

I will acknowledge however, that there are a few things wrong with Duel, Mann talking to himself for instance is not very believable. A character talking in his mind is effective (as we hear in the Chuck’s Café scene) but out loud this seems slightly unrealistic and even amateurish. Having said that, the talking out loud is an understandable aspect of the movie since for most of the film its just one character and there can’t be complete silence. This of course is a small issue and it doesn’t spoil the overall film. The rest of the movie is almost flawless; from the cinematography, the framing, the editing, and the aforementioned score. There’s also some nice touches such as the numerous number plates across the front of the tanker truck, possible trophies from other victims?

Steven Spielberg has made many movies, some brilliant some not so much, but his later work has suffered from a child-friendly, purposely cosy and safe atmosphere. His earlier work such as Jaws and Duel were slightly different in that they could be watched by children, they did have a neat and happy ending, but the films themselves were suspenseful and the enemy was always believable and menacing, and despite not seeing any real gore or violence these earlier films were much more frightening. Duel is definitely an example of Spielberg’s earlier, better work, from the silent and lonely atmosphere of the desert road, the stark wilderness, to the build-up of action and peril, Duel is a masterpiece of suspense and thrills. Even for a PG-rated film, Duel feels much more dangerous than say Jurassic Park. The overall tone of Duel for me raises this movie much higher than more trivial flicks, in fact I would put Duel alongside films like the aforementioned Psycho in terms of creating a tense atmosphere whilst giving birth to a new fear; a fear of the road. For me, being chased by a formidable tanker truck driven by a faceless psychopath is up there with being butchered in a shower of a run-down motel.

A Duel To The Death.