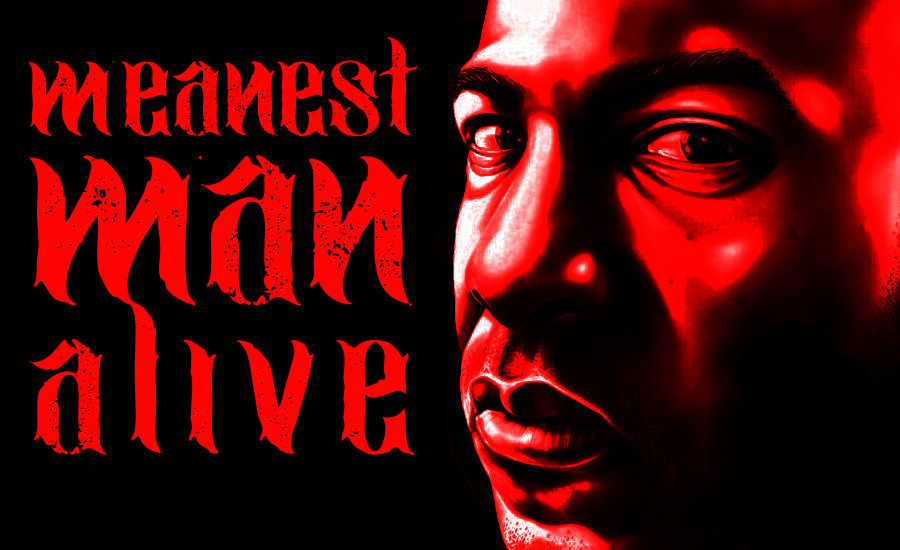 Jus Allah’s album “M.M.A.” could have been so much more, especially since Jus is one of the most unique rappers who successfully blends Horrorcore; serial killers, witchcraft, violence, with black comedy, pessimism and even a little introspection. That being said, his 2015 album “M.M.A.” (Meanest Man Alive”) is a mixed bag containing some interesting lyrics but no memorable choruses, and despite flashes of brilliance, the overall LP is average.

“M.M.A.” begins with the very short song “Cans” which contains one verse, no chorus, and some overly-simplistic production, and this becomes an unfortunate trend for the album – amateurish beats, short songs with unremarkable hooks. Although these elements might be tolerable on their own, together they make this potentially impressive album feel rather inferior. Don’t get me wrong, the album contains some satisfying lyricism from Jus Allah, take “Days Like This” as an example, but even these strange lines are marred by the uninspired production that does a disservice to the lyrics…

“I have a blind moms, she reads cards, recites psalms, she still sees, she draws eyes inside her palms. One of my favourite psychics, she told me this exact thing would happen, she’s priceless, she told me there’ll be days like this. How she know the future? Whenever confronted, she guesses the number that you’re thinking from 1 to 100. The truth is the only logical explanation, for something after you’ve eliminated the impossible. I still believe in magic, about to take classes, as of now I’m outta practice, I couldn’t pull a nickel from an ear when I first started, within a year my target was making people disappear”

“Converted” is one of the better produced tracks and it includes a chopped string section and a sample of Tommy Lee Jones from “No Country For Old Men”. But with only two short verses and no chorus, this potentially great song feels like it’s been cut short. “Danger” is another song that’s way too brief – the two verses include some decent lines like “you can’t put me in a box, I’d have to stand still while you build walls around me” but the beats are overly simplistic and repetitive. Most of the songs sound like they’re trying to be dark yet overtly underground, but most come off as insubstantial and dreary. “Thoughts” for example contains a sample of Nas’ “One Love” during the chorus and also samples from the game “Arcanum” but this type of juxtaposition unfortunately makes “MMA” more illogical that Illmatic, but hey, at least it lasts for three verses.

“Therapy” is one of the better tracks on the album with much better production and the sample from “The Matrix” gives a sense of foreboding. Even though there’s only two verses, there’s some great lines, the fantastically creepy final verse is simply brilliant…

“I lived underneath of hell, I couldn’t eat, couldn’t leave the cell. I couldn’t see, I learned to read from a Speak and Spell. It was everything I needed, I was treated well, just another day at the office, I was Steve Carell. I couldn’t sleep, I’d stand the entire task, a would-be king, the man in the iron mask. I was trapped, my capturer had the higher grasp, ’til I snapped the bars and shattered the fibreglass. It was enemy territory, foreign sand, it wasn’t heaven or hell, it was borderland. My birth parents must’ve had a more important plan, they left me on a porch, knocked on the door and ran. In the wrong hands, abandoned with calamity, I ain’t have a chance or a family, I ain’t have a plan B or sanity, I ain’t have fantasies in canopies. Life is no guarantees or [entropies]”

“When Winters Going” is another satisfying song and aside from the fantastic simile “Love means nothing to me, my life’s like tennis”, it also contains a brilliantly macabre scenario that only Jus Allah could some up with…

“I am mistaken for Satan, I use his name for escape and evasion, I’m an identity thief, he’s like Jason Bateman. I was raised in hell, we grew up twins, we used to talk at the same time, move in unison. Headed down the wrong path, we both were distorted, he wanted to eat the body, I wanted to pork it. It’s unfortunate we both went separate ways, as soon as we came to a road with a fork in it. I noticed in an instance, I began to age at a quicker pace the further we’d separate in distance”

The stand-out tracks are “When Winters Going”, “Therapy”, “Destiny”, and “Converted”. “Therapy” and “Destiny” are an example of what the whole album could and should sound like. Lines from “The Matrix” make for a decent chorus and the better production in these songs could have been extended to the whole LP.

A ten track album can sometimes be just right in terms of length (listen to Nas’ “Illmatic” or Heather B’s “Takin’ Mine” for instance) but in the case of “M.M.A.” this is obviously too short – at under 30 minutes long it feels almost like an EP or even an album sampler. Every time a song gets going it ends, and even though Jus Allah’s verses are highly creative it gets irritating when a song you’re getting into ends abruptly. Apart from one track every song is under 3 minutes with most around the 2 ½ minute mark, and for an album that’s almost unacceptable. The production despite not lasting long is extremely disappointing, most of it sounds very amateur – simplistic and bare. The beats are much worse than something like “Soul On Ice” (which usually gets brought up when it comes to lacklustre production in Hip-Hop music) but for me “M.M.A.” is much much weaker. The bleak sounding “Wine And Spirits” with its amateurishly sampled chorus is an example of this problem, there’s even a weird squeak and the sound of a submarine sonar in the background which has nothing to do with the topic of the song. “180 Degrees” also contains very poor and annoying production (someone please stop that horn!), even a potentially great track like the aforementioned “Days Like This” is ruined by the repetitive beat and the amateur scratching during the chorus.

These problems could have been easily fixed – for example, the original version of “180” is better produced, longer, and it contains a decent chorus with its samples of Onyx’ Sticky Fingaz and The L.O.X.’s Jadakiss. This song however, unfortunately never made it onto the album…

There’s also a track called “Thought Crime” that should have made it onto the LP, especially since this is another track that’s over the three minute mark…

“M.M.A.” suffers from poor production and its short length (both in terms of individual track length and in terms of total runtime) is very disappointing for a fan wanting a full-length LP from Jus Allah. That’s not to say there’s anything wrong with Jus, in fact if he wrote an extra verse or two (or rather several) the rhymes would have easily been worthy of a 9/10 rating. And, if the production were better who knows? With Jus Allah’s lyrical ability, his unique content, and darkly comic personality, this album could have easily been an 7/10, if all these tracks were remixed and extended with the two songs above added to the tracklisting, it could even have been a 8/10. But, as it stands I can’t give any higher than a 5/10 to an album that’s around half-an-hour long, lacks memorable choruses, and contains such mediocre production – and this is coming from a big fan of Jus Allah and Jedi Mind Tricks.